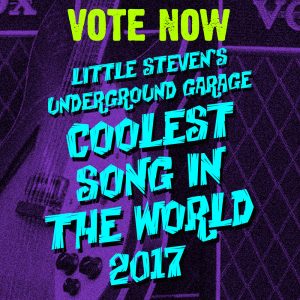 And now it’s time once again for all of you listeners with impeccable taste to VOTE!!

Voting goes live TODAY – November 24th (Black Friday) and ends on Saturday, December 23rd. You may vote for your favorite “Coolest Song” once every 24 hours!

(“Gimme Gimme Rockaway” by Steve Conte has been nominated since it was chosen to be The Coolest Song In The World for Show 816 – November 20th, 2017. You can listen to the show here: http://undergroundgarage.com/shows-899-800)

In addition to the voting, fans can also enter the The Hard Rock Hotel and Casino Punta Cana contest. First place prize will receive: round-trip airfare for 2, a 4-night, all-inclusive stay and $500 resort credit at the Hard Rock Hotel in Punta Cana!

Remember, fans may vote for their favorite “Coolest Song” once every 24 hours, and may enter the Hard Rock Punta Cana contest as many times as they want. The “Coolest Song of 2017” winner will be announced on January 1st, during Kid Leo’s “Coolest Songs of 2017 Revisited Annual Year End Review” show on Sirius XM-21 where Kid Leo will play all 50 “Coolest Songs” of 2016.