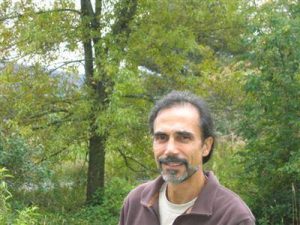 Remembering all the lives that were lost on this day 19 years ago. And thinking of my cousin Richie Conte, firefighter and hero who was the only man from his company to come back home that day. Here’s his story.

Saved only by acts of fate, Rich Conte of Stowe still carries the legacy of his firefighter brothers

One minute later, an alarm goes off in the firehouse of Engine Company 33 and Ladder Company 9 in the East Village in Manhattan. Firefighters from Engine 33 scramble to board the red fire truck. Ladder 9’s firefighters roll out moments later.

Engine 33’s night shift driver — the “chauffeur,” in firefighter’s parlance — had just asked Rich Conte to cover for him so that he could leave early to drop off his kid at day care. Firefighters routinely cover for one another, and Rich took over with little thought. Conte normally rode “the back step” of the rig as a regular firefighter at Engine 33, but he had been a chauffeur in another FDNY engine company for eight years so he knew the job well.

It was the first act of fate for Rich Conte that morning.

Conte jumped behind the wheel and began rolling the rig. He paused to ask Bobby King, one of Engine 33’s regular chauffeurs, if he wanted to take over driving, but Bobby waved him off and told Conte to keep going – King would ride the back step on this call.

Conte gripped the wheel and skillfully maneuvered his large truck through the growing crush of traffic around the World Trade Center. He reached the site within minutes. As he was about to turn the corner to drop his men at the entrance to the North Tower, Lt. Kevin Pfeiffer, Engine 33’s officer, ordered him to stop and let the men out. Conte was surprised — he assumed he would deliver his crew to the front doors of the North Tower a half block away.

But Lt. Pfeiffer was one of the best officers in the department — “he was definitely going to be a captain one day” — and Conte did as he was told. He set up his rig a half block from the building and started hooking up hoses.

It was a third act of fate in a span of just a few minutes.

A mere 48 minutes after it was hit, the 110-story South Tower of the World Trade Center collapsed. Thirty eight minutes after that, the North Tower vanished in a vortex of white dust.

Three firefighters from Ladder 9 and seven from Engine 33 died in the Twin Towers that day.

Rich Conte was the lone survivor of the Engine 33 firefighters who responded.

Rich Conte grew up in Brooklyn. His father was a wedding photographer and his mother worked as a manager for Avon, the beauty products company. After graduating Brooklyn Tech high school, he worked as a disc jockey in nightclubs while attending Manhattan College and Brooklyn College part-time. He considered moving to Colorado to be a DJ and teach skiing, which he enjoyed. But in 1978, he decided to take the test to be a firefighter, thinking it might be an interesting job. In 1983, he was informed that he had passed the test.

“I liked to climb trees — I was a tree hugger since I was a little kid. Where could you go and get paid to climb?” he says.

At age 29, Rich Conte became a New York City firefighter. He and his wife moved to a town near Newburgh, New York, where they had two kids. Conte would commute about 90 minutes to the city, where he would pull several 24-hour shifts per week. For 15 years, he worked in Engine 18, eight of them working as a chauffeur driving fire trucks and running the pumps. His interest in nutrition — he is a vegetarian, “the smallest club in the fire department,” he jokes – led him to work for two years in the health and fitness unit at FDNY headquarters, where he helped other firefighters improve their diet and exercise. In 2000, he decided to return to working on the back step and joined Engine 33, which occupies a beautiful Beaux Arts firehouse on Great Jones Street in the East Village that it shares with Ladder 9.

Here’s another one i recorded recently in Holland:

Steve performs “Busload Of Hope”, a song from his 2009 album Steve Conte & The Crazy Truth (Varese Sarabande/ Universal Music) during the COIVD-19 pandemic, recorded from “home” in the south of The Netherlands.

Steve Performs Ballad Of The Lower East Side & Gimme Gimme Rockaway In Lockdown! 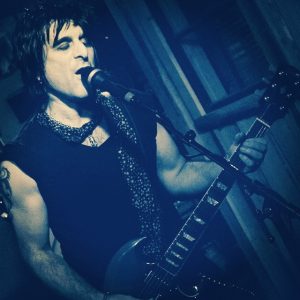 Just a little update here folks…I am now in the mixing stage of my new album, “Bronx Cheer” – and it is sounding incredible.

The album was produced by Andrew Hollander & myself. (This is the 2nd time the team of Conte/Conte/Drayton/Hollander have made a record together – the 1st time being on the 2003 release “Bleed Together”, under the name The Contes.)

At the same time that we are mixing, I am working on the album art with the fantastically talented Rich Jones (my co-guitarist in the Michael Monroe band) who has done art direction for many other releases I’ve been involved with; The Steve Conte NYC Album, International Cover-Up, my mom Rosemary Conte’s jazz album, “But Beautiful” and every Michael Monroe band album since 2010.

Steve Sings For A Czech!!

Here is the 2nd record I’ve done a remote recording session for in my new home studio (the 1st was “Trashman” by Brian Ray).

Last fall this Czech artist, Jirka Mucha contacted me via my Facebook music/band page (https://www.facebook.com/SteveConteNYC – this is the way to do it folks!) and asked me if i would consider singing a song for him.

I heard it, liked it very much and after we came to an agreement he sent me the fee via  PayPal, I sang it in NYC and sent him the vocal tracks in Czech Republic via the internet.

For those who don’t know, this is one of the ways we recording artists have been making records for over a decade now…there are no more borders!! 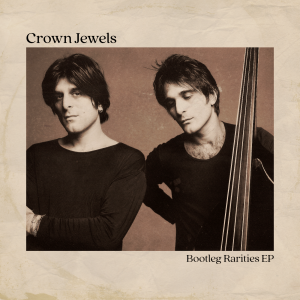 I hope you are all keeping safe and healthy during this crazy time. I’d like to announce the release of a collection of songs that my brother John and I have been sitting on for a long time in hopes of doing some sort of “box set” for our band Crown Jewels – but there is never been a better time to release new music then now when people are isolating at home and need some joy & diversion in their lives.

So – today I will be releasing this collection of songs on bandcamp.com entitled the Bootleg Rarities EP. It contains 6 well-recorded songs spanning the years 1992 – 1999 when we were most active in our writing & recording as the band Crown Jewels.

The important thing is that Bandcamp.com is waving all commision fees from artists today between 12 noon and 12 midnight EST so if you purchase it between those hours my brother and I will get 100% of the money to split between us. This is important for us & our families since we are out of work for the for seeable future and could use all the income we can get right now.

Please consider going to bandcamp and purchasing the EP…and don’t be fooled by the photo – this ain’t no jazz album – it’s pure rock ‘n roll, with soul – and pop melodies! (As per usual…)

Thanks so much…and let’s get through this thing safely.
Stay healthy…stay distant…STAY HOME!

All my best
x
Steve

Steve Conte & His Band The Crazy Truth To Play The Album, STEVE CONTE & THE CRAZY TRUTH In It’s Entirety! 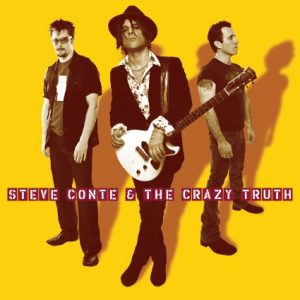 Steve Conte & his band The Crazy Truth will play the album, STEVE CONTE & THE CRAZY TRUTH in it’s entirety!

The show will be in honor of the 10th ANNIVERSARY of the album’s release. The setlist will be rounded out with songs Steve has covered and released on his INTERNATIONAL COVER-UP album as well as a few surprises. (Ticket link below.)

The Steve Conte & The Crazy Truth album was the first studio album released under Steve’s own name on a major label imprint, VARESE SARABANDE (UNIVERSAL MUSIC) and was the first to feature a true “band” backing Steve as a lead vocalist; Phil Stewart on drums and Lee Kostrinsky AKA “Leeko” on bass. It also marked Conte’s return to the raw rock & roll of his youth after a number of more introspective, singer-songwriter albums with his brother John, as the Crown Jewels and The Contes.

Released hot on the heels of ONE DAY IT WILL PLEASE US TO REMEMBER EVEN THIS, the 2006 comeback album by the legendary New York Dolls (of which Steve was a part of as a songwriter, guitarist and backing vocalist), STEVE CONTE & THE CRAZY TRUTH is a NYC-style garage/punk/ rock record with songs that reek of the dirty streets; This Is The End, Gypsy Cab, Texas T, The Good Are Odd, Get Off, The Truth Ain’t Pretty, Her Highness, Busload Of Hope, Strumpet-Hearted Monkey Girl, Indie Girl and Junk Planet.

“8 Stars Out Of 10. Music to instigate and soundtrack fighting, fucking, speeding, hurling abuse and waking up buck-naked in a stranger’s bathroom. This might even be better than the last Dolls album”

“There is very little genuine rock and roll out there at the moment – but Steve Conte has hit the nail on the head with this one!”

For tickets go to:

Steve’s latest video for “What Would I Do If I Were Me” was filmed completely in Morocco, Steve’s “home across the sea”. The soundtrack features guitar solos by Steve, Ginger of The Wildhearts and Dregen of Backyard Babies & The Hellacopters. Joining Ginger Wildheart & Dregen on the recording are Kenny Margolis & Boris Kinberg of Mink DeVille, Rich Pagano & Keith Christopher.   The record was mixed by Niko Bolas.

NO ANIMALS WERE HARMED IN THE MAKING OF THIS VIDEO. 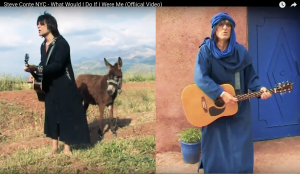 The long overdue video for “What Would I Do If I Were Me?” from The Steve Conte NYC Album will finally see the light of day – this summer!

Filmed entirely in Morocco – Steve’s “home across the sea” – the video shows the beautiful landscape of North Africa while the song features guitar solos by Ginger Wildheart of The Wildhearts and Dregen of The Hellacopters and Backyard Babies.

Special thanks to Joost Kuiper